Is Your App Solid? (Does it need SSD?)

It’s 2017 and this is the year Gartner estimated more revenue will come from selling Solid State Drives (SSDs) than their slower, spinning, ancestral Hard Disk Drives (HDDs). 1 To some, this seems like a no-brainer, but many experts believe the estimate is way off as HDDs continue to improve capacity, MTBF (Mean Time Between Failure), performance, and price. As more enterprises adopt SSDs, there have been shortages in flash memory used in their construction, which has driven prices up and created supply chain delays. That’s why we’re here, to explore situations where you really need SSDs vs when something else may be good enough (or better!) for your use.

Let’s quickly review the primary differences that make up the choice: Capacity, Failure rate, Performance (both sequential and random I/O), Price and Sourcing. This is a high-level comparison only, data-center architects are often considering many more factors such as heat, power, form factor, compatibility, vendor preference, and ease of installation. 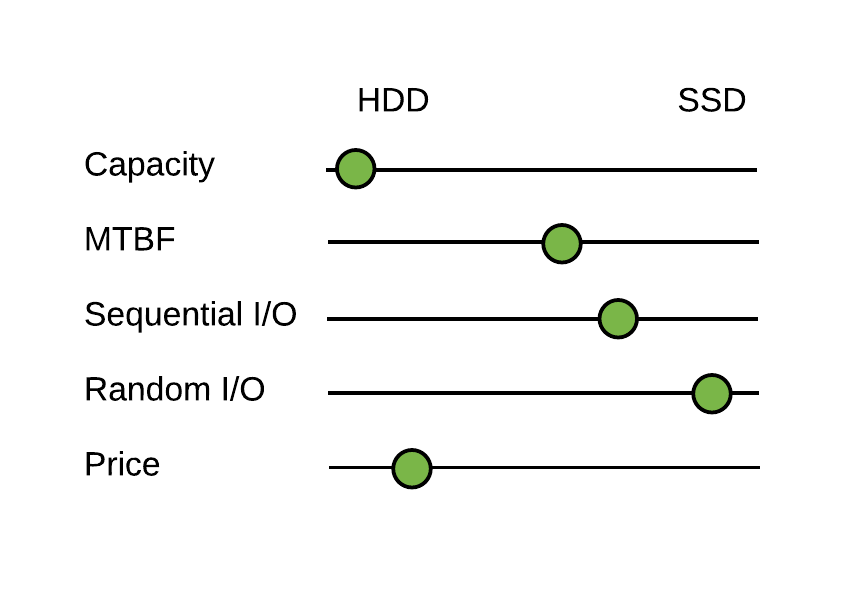 HDD vs SSD on Common Attributes

What’s This Mean for Customers of AMPS?

AMPS can benefit from fast storage on several dimensions. The most obvious one is transactional volume in its transaction log. Since AMPS writes to the transaction log durably (it doesn’t acknowledge it’s stored until the device has completed the write) then the throughput of the device dictates the transaction throughput of the system. For this comparison, we’re using commodity devices locally attached to AWS cloud instances and the device was completely isolated, so this was the best-case scenario for sequential write performance for these devices. (Important: Using higher-end, enterprise SSDs AMPS can do easily 5x these numbers.)

You can see that an HDD does well at 300K messages per second. There are many messaging problems where that’s easily enough capacity – however, you need to be careful to isolate the AMPS transaction log to prevent other applications or services from moving that write head. If you’re over 100-300K messages a second, you’ll want to look at an SSD. If you require more than 300K/s, you may want to start considering higher end SSD devices as well where you can achieve 2-3 million transactions per second.

If you have a transactional State-of-the-World (SOW) topic, then you’ll have a workload that’s considered random I/O and the performance of your AMPS deployments can greatly benefit from SSDs. When AMPS updates records for transactional SOW topics it will typically update the on-disk record image in-place, which has all the characteristics of random I/O for most workloads and abysmal HDD performance. This also means that instance recovery or SOW topic rebuilds can be done much faster on SSDs.

AMPS has a sophisticated transaction log replay system that allows users to replay content filtered event streams at a specific rate – for example, you could replay an event stream at 4x the real-time rate, 5MB/s, or 50,000 messages per second. Some users have 1000’s of these replay consumers at any given time, which can put tremendous stress on the storage device in environments where the total persisted event stream is much larger than the amount of memory available in the host environment.

The AMPS Transaction log is composed of individual journal files, where the latest journal file is being written to and any of the journal files could be concurrently read from. These event stream replay consumers, even though they’re individually sequential, will perform like a randomized I/O workload in aggregate. Because of the randomized I/O pattern, the write performance to the head journal will suffer in HDD environments with several concurrent replay consumers.

In the following diagram, you can see a high-level view of the AMPS transaction log, showing replay consumers reading from “cold” journals as well as the head journal being written to. We’ve designed AMPS so that cold journals can be archived to cheap-n-deep HDD (or even NAS) so that certain deployments only need SSD storage to cover their “hot” data where the data is being read and written to.

Slow SSDs: Don’t go buying SSDs assuming any SSD will be better than any HDD, there do exist SSD devices that are far slower/worse than HDDs – check the drive specs before buying!

File System: The choice of file system can make a huge difference in performance for some work-loads, but more importantly are the mount options for the device. For example, if you’re using the popular ext4 file system, do you need to have journaling or can you turn it off for a performance benefit? Can you use noatime and nodiratime to turn off file metadata updates to update the access time for every read?

Multi-Tenant Environments: If you plan on running multiple AMPS instances on the same host or other applications alongside an AMPS instance, you’ll want to be careful to isolate the load or provide enough capacity to achieve your objectives. It’s a common error to benchmark systems independently and then deploy collectively not aware of how the resources degrade non-linearly under load.

TLDR; Here are some questions to help determine if you truly need an SSD for your AMPS deployment. If you answer “Yes” to any of these, then you’re a great candidate for an SSD and it’s unlikely you’ll regret paying up for the SSD device.

Will you be operating multiple I/O heavy applications on the host?

Multi-tenant environments where performance matters can benefit from SSD and minimize the disruption of one service from I/O bursts of another.

Will you be storing more than 2x the hosts available memory on the device?

When the amount in storage vastly exceeds the host’s memory, system performance can be lost to OS virtual memory paging activity.

Do you plan on making heavy use of bookmark/replay subscriptions?

Do you plan on using transaction log backed SOW topics?

Do you plan on using high-velocity message queues?

The features above can approximate a randomized I/O workload and can benefit from SSD devices.

Will you be publishing bursts of events or messages at more than 100MB/s?

Can you afford the monetary costs and sourcing lead-time?

SSDs are currently more expensive and the sourcing lead-time can be significant for some firms. If you need ample storage today, you may not have SSD as an option.

Because of the differences in performance, cost, and availability, both HDD and SSD options continue to thrive. Every quarter the HDD vendors offer more capacity and a lower price while SSD vendors are cranking up capacity and performance. If you’re even asking the question “Do I need an SSD?” and you can buy an SSD device that matches your criteria for performance, capacity, budget, and time-to-market, then you should’ve already done it.

[Updated 08 September 2017: Clarify that queues can have a disk usage pattern similar to bookmark replay.]