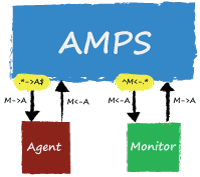 The power of AMPS filtering allows your application to receive the messages it wants to process, and none of the messages it doesn’t. Client-side filtering is no longer required with AMPS. The ability to use Perl Compatible Regular Expressions (PCRE) to define filters on a topic, a message, or both allows your application to achieve an unrivaled level of precision in message delivery.

In a previous article, we introduced the selectivity granted by the content filtering and topic filtering in AMPS. It is recommended to read the article to be familiar with the concepts introduced there before diving into this article.

In this post, we give a brief overview of how AMPS implements topic filtering, and then build upon that knowledge to describe how to implement a simple request / response heartbeat monitoring system using AMPS topic filtering. We also provide an example in Java, and discuss how to enhance the system to be more (or less) selective by using different topic filters.

With AMPS, a client can use a regular expression to subscribe to topics that match a given pattern. This feature can be used in two different ways:

For our request-response heartbeat monitoring system, we will be focusing on greedy subscriptions.

Setting up the Example

Heartbeat messages consist of two parts - the request message (requesting a heartbeat) and the response message (letting the requester know that it is still alive). In each of these messages, there is a “source” and a “destination”. In the heartbeat request message, the source is a heartbeat monitoring application and the destination is the agent that is being monitored by the monitoring application. 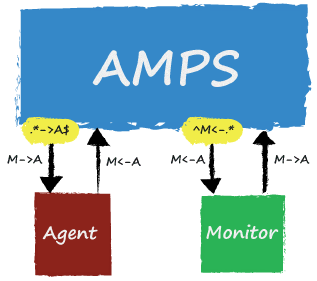 With this information, we want to conceive of a format for our message topic that can be used to control the flow of messages from the source to the destination, regardless if it is a request or a response message. This lends nicely to a topic format that follows:

We have included an implementation of the `Monitor` and `Agent` classes in Java along with our sample, and will be presenting code samples from that project. The full project, along with instructions in the README file for building and running are available here: [01\_simple\_request\_response.zip](https://www.crankuptheamps.com/downloads/01\_simple\_request\_response.zip)

Similarly, the agent will subscribe to the topic ->A$ - which can be interpreted as “subscribe to all messages where the topic ends with the string ->A”.

Regarding our message format, it's worth pointing out is that we chose to implement our Request/Response system using topic filtering, as opposed to content filtering. This decision is based entirely on the premise we would like to keep the routing rules in the message's topic separate from the message contents. In our particular example, our routing doesn't need to know anything about our message contents when making decisions about delivery.

By now you should see the beginnings of how such a system would work, but let’s walk through the lifespan of a single request-response to see the system in action!

To begin the lifespan of the heartbeat message, the system is put into motion when the Monitor class (M) publishes a heartbeat with a timestamp message to topic M->A.

The Agent class (A)- which is subscribed to Topic ->A$ - receives the message, recognizes this is a request topic because of the presence of the -> token, parses the prefix of the Topic field, and then constructs a response message to be returned to M. A publishes the response message to topic M<-A.

Monitor M - who is subscribed to Topic ^M<-.*- receives the response message, recognizes this as a response topic because of the presence of the <- symbol, parses the postfix of the Topic field to see that it is from A and completes processing the heartbeat.

In our example, processing the message means that we write a message to the console noting that the heartbeat request and response message have been received. In a more sophisticated system, additional logging and processing could take place.

For completeness and to show how simple it is to create a class to parse the messages manually using our routing tokens, the TopicParser class has been included above. In our example, each of the three cases are enumerated in the if / else structure, and populate a TopicParse object, which is then returned as a result of the parse() method. The actions taken as a result of the parse function can easily be replaced with more advanced features, but that will be an exercise which is left to the reader.

While the example here is a simple one, it would be trivial to add even more powerful features such as: listener notifications when heartbeats are received / missed, processing messages once and only once, detectng messages received out of order. Through the powerful combination of AMPS Topic filtering, PCRE, and some creativity in combining these two features - we are able to architect a solution that provides a simple heartbeat request-response system in AMPS.

Try it yourself to see how easy request/response messaging can be with AMPS! Download the sample project in Java, along with instructions in the README file for building and running the sample: 01_simple_request_response.zip

Read Next:   Come and See 60East at the Trading Show with Diablo Technologies